Skip to content
You are here
Home > Performance Director Bio

Mr. Evans has taught music in Arizona for 36 years during which time he taught instrumental and choral music in Snowflake and in Mesa. He recently retired as the choral director at Dobson High School, where he taught for 30 years. He holds the Bachelor of Music Education Degree from Northern Arizona University, the Master of Music Degree from the University of Oregon, and has done additional doctoral work at the University of Oklahoma. He currently conducts an evening community choir at Mesa Community College and was recently named conductor of the Concert Choir at Arizona State University.

Bart has held leadership positions in the Arizona Music Educators Association (AMEA) and in the American Choral Directors Association (ACDA) at both state and divisional levels. He served numerous years as the Vocal Chair for the AMEA Southwest Regional Honor Choir. His choirs have appeared at state and divisional conventions of ACDA and at state conventions of AMEA. 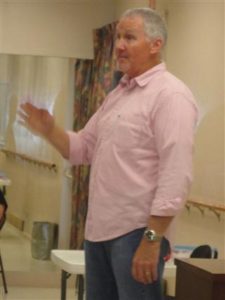 He served as the choir director for the Arizona Ambassadors of Music, completing eight European tours with that organization. He has been the guest clinician for four of Arizona’s Regional Honor Choirs and was the guest conductor for the 1998 Alaska All State Choir. He was named the 2001 recipient of the “Distinguished Professional and Community Service Award” by the Alumni Association and the School of Performing Arts at Northern Arizona University. In 2006, Bart was named the Arizona Music Educators Association Music Educator of the Year.

Celebrating his thirteenth year as a grandfather, “Papa Bart” admits that he now sings more lullabies than any other kind of vocal literature–and he looks forward, in addition to a variety of duties for the Chorale, to his role in assisting Methodist Church personnel with the set-up of lighting and sound environments for these performances. Though officially retired, he and wife Cris humorously observe that they both now have “two choruses” and, as many Sun Lakers have learned, that being retired is sometimes just the beginning of another gratifyingly busy life!